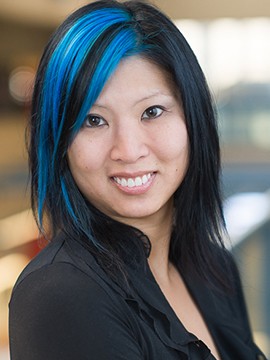 Amori Yee Mikami, PhD
Associate Professor | Department of Psychology University of British Columbia
Much has been written about social skills and peer relationship problems among youth with ADHD. However, peer interactions change dramatically as children age, and considerably less is known about the social worlds of adults with ADHD. Online social networking websites such as Facebook are highly popular methods of social communication for emerging adults. Individuals 18-25 are the age group most likely to use Facebook, with women over-represented among Facebook users relative to men. Therefore, having skilled, socially competent online interactions is important and relevant for the social world of emerging adults. However, how do emerging adults with ADHD, particularly women, navigate Facebook?

My colleagues and I investigated this question in 228 women participating in the Berkeley Girls Longitudinal Study, 140 of whom met diagnostic criteria for ADHD in childhood and 88 who composed a matched comparison sample. The women entered the study when they were about 9 years old. Approximately 10 years later, when they were entering adulthood, we asked them about their use of online social networking websites, and we friend requested them on Facebook (most of the women had a Facebook page).

Women with histories of childhood ADHD expressed a preference for communicating with others online as opposed to face-to-face. They stated they felt more comfortable online and perceived that they could “be themselves” more often. They were also more likely to report talking to strangers online, whereas women with no history of ADHD typically talked online with friends whom they already knew from face-to-face contexts.

However, when research team members who did not know the women (or the women’s ADHD history) looked at these women’s Facebook pages, an interesting story emerged. It seemed that women with histories of childhood ADHD had fewer Facebook friends than women with no history of ADHD. In addition, the posts from the Facebook friends tended to have less emotional support and less positive connection in them.

We then got interested in what might have contributed to women with histories of ADHD looking different on Facebook. Follow-up analyses suggested that having ADHD in childhood tended to predict girls being rejected by their face-to-face peers in elementary school and middle school. In turn, being rejected by face-to-face peers predicted women, in emerging adulthood, preferring online methods of communication yet also having poorer observed relationships online. We wonder if long histories of peer rejection in school may deprive girls with ADHD from having the experiences that teach someone how to build positive relationships, and how to socialize in a skilled fashion online.

The online world is here to stay, and socially navigating relationships online is a crucial skill for emerging adults. Women, who more often use Facebook relative to men, may be especially affected by this technology. These findings suggest that, similar to the way that children with ADHD may have problems with peers in face-to-face situations, social communication problems may transfer over to the online domain for some emerging adults with this disorder. However, we speculate that similar to the way in which it is possible to improve peer relationships face-to-face, this may also be possible to do online, and having good friends online can contribute to happiness and healthy adjustment.

Dr. Mikami will be presenting at the 2017 APSARD Annual Meeting on “Eating Pathology Among Adolescent and Emerging Adult Women With ADHD.”