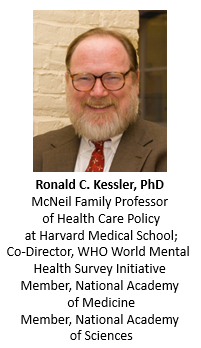 (Editors's Note: This text comes from transcription of an extensive interview on November 23, 2015 with Ronald C. Kessler, PhD.)

There's a lot of evidence to show that the structure of ADHD changes from childhood to adulthood. For many years there was a widespread belief that ADHD kind of disappeared, people matured out of ADHD as they got into adulthood. We know now that's not the case, but as we learn more and more about people who have ADHD as they age, we realize that what seemed to be that “ADHD disappearing” was really a transforming. The kinds of symptoms that people have change, so the hyperactive and impulsive symptoms become less prominent, the inattentive symptoms become more prominent, and also we're coming to understand now that they've become more differentiated. It's really the symptoms become more of a spectrum of executive dysfunction than just inattentiveness.

There's also some thinking that there might be another dimension that becomes important, and it's not just the cognitive part of the executive dysfunction, but some kind of emotional dyscontrol that looks somewhat different from hyperactivity or impulsivity in childhood. We're interested in looking into that as a way of helping to refine the ADHD diagnostic criteria. As you in know DSM-5 has just been put into place in May, 2013. We looked at the full set of adult ADHD symptoms in the DSM-5, which is the 9 AD and the 9 HD impulsive symptoms. This is in addition to about a roughly equal number of other symptoms that had been suggested by various experts as being indicative of adult ADHD that you don't see in kids. Again, most of these problems were associated with things having to do with executive function, so trying to manage complex tasks and things that a person might do as an adult worker is different from what a 12-year old child has to deal with.

We also asked about emotional dyscontrol. When we analyzed that, we found a very consistent structure across three surveys. We found clear evidence of one dominant factor that was really not AD (attention deficit symptoms.) It was again, the AD symptoms plus this broader array of executive dysfunction symptoms; not being able to finish tasks on time and juggling multiple tasks, and the kind of things that you and I and other people in the modern world have to deal with all the time.

We found four factors in adult ADHD patients: attention deficit, hyperactivity, impulsivity, emotional dyscontrol. All four of those were very strongly correlated in having a diagnosis leading to DSM-5 ADHD criteria. So we find that these factors are important, but as it turns out, the emotional dyscontrol measure, and the broader executive functioning measures that are not part of DSM-5 have associations with the diagnosis equally as strong as the symptoms that are part of DSM-5. So it's very clear that the symptoms that are used right now in DSM-5 are really just a subset of a broader set of symptoms in the general population. That's the first thing we found.

Then we've done some other interesting things based on that, looking at the profiles of people, and looking at the kinds of symptoms that seem to be dominant. The question is, is there any evidence to suggest that there is a broader spectrum of ADHD where people who don't quite make DSM criteria had a large set of other items that should be in the same spectrum, but have been missed then. That's the basic idea here.

We have DSM-5, which is like the physician's desk manual for what is classified as ADHD and what is not ADHD in the field of mental disorders. New associations are being found. So what do practitioners do with that before DSM-6 comes out? How does this spread into the population of practitioners who are trying to correctly diagnose people? 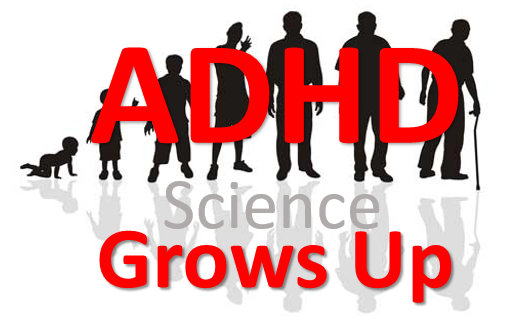 One big purpose of this is forward thinking for DSM-6, which is now quite a ways off since we just started with DSM-5, but it's important to get straight what the nature of the beast is if you're trying to get better diagnoses. So we hope that over the next few years we will be looking at the data on the structure of ADHD to be the foundation for deeper studies to help us flesh out sub-types that are more meaningful in adulthood than in childhood. But for the "right now" part, what we're finding is that even when a person meets current criteria for adult ADHD, the things that are the symptoms in DSM-5 might not be the presenting complaints!

Patients don't come in to a doctor and say "Gee, I have a problem with things that are half impulsive, and half hyperactive." Further, the aspects of inattention are very often kid-oriented and do not necessarily present as a problem for adults. It might be that for the doctor, it's easier to pick up on the syndrome by asking about things that are not current in DSM-5. In terms of screening, the ability to find people who have a problem who don't realize it yet, get them the treatment that could be helpful and improve the quality of life could be improved by us having a better understanding of what the real life problem is. Because of this, one of the spin-offs of this analysis is that a group of us are working on a revision of the ASRS Screener (ASRS V1.1, the current six question ADHD screener used by clinicians to screen for ADHD: Adult Self-Report Scale) that broadens the set of questions to include executive dysfunction, to see if there is a more diagnostic set of questions that could help us identify ADHD in adults. Then a group of us as well are studying the structural aspect of ADHD to see in clinical research studies if we should be probing a little bit more deeply for sub-types of ADHD where it might make sense to think of differential treatment response, or a treatment response to executive dysfunction in new ways that we haven't used before.

The most notable is that the emotional dyscontrol set of symptoms don't seem to be as distinct from the executive dysfunction problems, the way AD and HD are in childhood. It turns out that those emotional characteristics are more prominent in adulthood than we had previously thought when we were looking only at hyperactivity and impulsivity. We have had this conception that ADHD adults are just like tall kids; they have this AD part and they have this HD part. We've always known that AD is more prominent, but we now know it's broader too. It's really not AD, it's executive dysfunction, and that's sort of a richer, more variegated kind of problem.

Instead of it being just hyperactive and impulsive, it's really hyperactive and impulsive and emotional dyscontrol, where you don't see so much hyperactivity or impulsivity in adults but rather a more subtle kind of emotional dyscontrol. There are a lot of people as adults who have a combined type of ADHD, as opposed to a pure executive dysfunction problem. But you don't see the combined aspect of it if all you do is focus on the impulsivity and hyperactivity. Neither of those are so obvious in adults, and you miss the fact there are these more subtle, emotional dyscontrol pieces if you are not looking for them using DSM-5 criteria.

ADHD was originally described in the early 1900's, and here we are 100 years later, underlining how new this science is and our understandings are. It’s not uncommon to see definitions get carved in stone. There are many medical conditions that are not terribly difficult to study, if you look at them, but they just never get looked at because of pre-conceptions. For so many years there was this notion that ADHD was a disorder of childhood that that was the end of it. We never looked at adults because of preconceived notions. We’re now at the point where young adults are coming back to their old pediatricians and saying, "Hey, Doc, I still need some of that medication."

As ADHD children have grown, we've started seeing this adult ADHD coming on. We’re now looking more closely into a rich, complex, and highly co-morbid condition that really makes a difference to people's lives. We've known for quite some time that having ADHD as a kid is a predictor of other kinds of emotional problems in adulthood, depression and anxiety disorders, substance use disorders and so forth. We're now coming to realize that it's also a risk factor for this broader and subtler ADHD variant that we hadn't recognized until recently, and then once we see it more clearly than we have in the past, it could well be that new treatment options present themselves that we haven't appreciated before. That of course is the holy grail for us moving forward in understanding the full life spectrum of ADHD.