Friendships and Social Networks of Adolescents With ADHD

Here is a blog based on a poster presented by Barbara Wise, Ph.D. from Indiana Wesleyan University at the 2018 APSARD conference

Although much research has examined social difficulties of children and adolescents with ADHD (Barkley, 2014; Glass, Flory, & Hankin, 2012; Marton, Wiener, Rogers, & Moore, 2015; Normand et al., 2011; Rokeach & Wiener, 2017; Storebø et al., 2011), no sociometric or social network analysis has been located that examined the friendship networks of adolescents with ADHD. Peer problems in adolescents with ADHD have been linked to risker sexual behaviors and substance abuse (Barkley, 2014; Umberson, Crosnoe, & Reczek, 2010). Many other adolescent health behaviors have been linked to peer influence. For clinicians working with adolescents with ADHD, an understanding of their friendships and social networks will assist in understanding their types of social difficulties, providing accurate anticipatory guidance, and serve as a foundation for building effective interventions for youth with ADHD that are struggling socially.

In this study, I looked at two questions:

This was a descriptive study utilizing secondary analysis of school social network data from the National Longitudinal Study of Adolescent to Adult Health, a nationally representative sample initially collected in 7th through 12th grades. Friendship nominations were collected in Wave I for all students in 122 schools; each student could nominate up to 5 male and 5 female friends. This allowed for whole network analysis of schools with >50% participation. Adolescents with ADHD symptoms in childhood were identified by retrospective self-report in wave III (N=703).
Table one gives the characteristics of the participants, comparing those who did and did not meet ADHD diagnostic criteria. 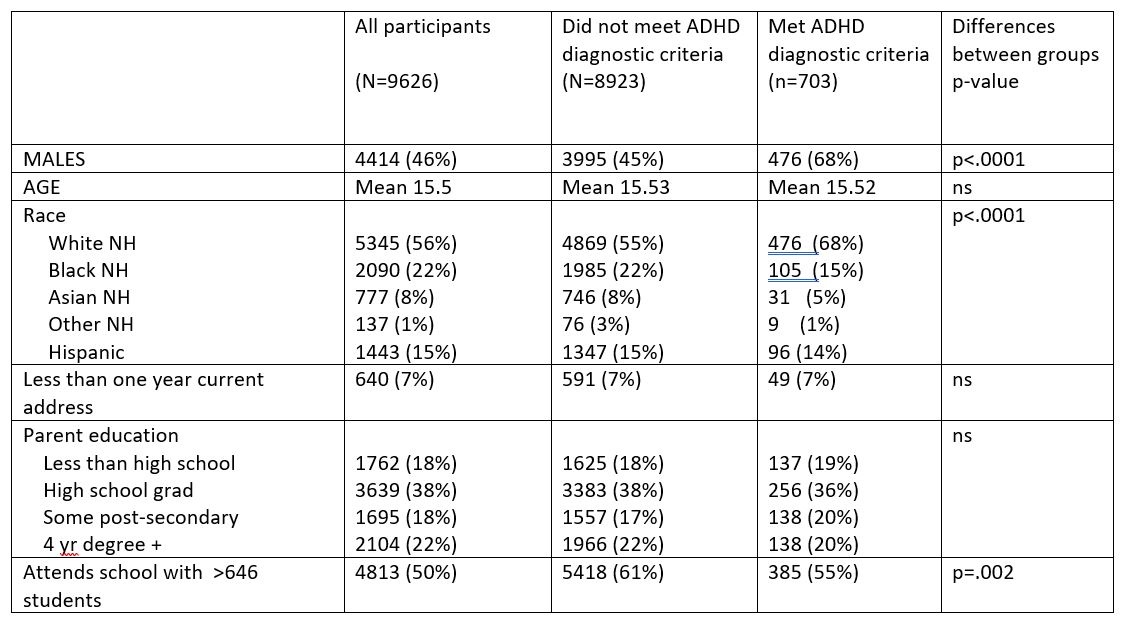 The findings are summarized below:

Perceived social acceptance. Youth with ADHD inattentive and impulsive self-reported significantly less social acceptance than those without ADHD.
Friendships. The presence of one mutual friend and time spent with friends increased with age among all participants, and this trajectory was not significantly different among those with ADHD symptoms. Multiple linear and logistic regressions demonstrated that those with ADHD were no more likely to be isolates or pendants (to have no or only one social tie) than others. Those with ADHD had similar strengths of ties with their friends as others, with those with hyperactive ADHD only reporting more time spent with friends than average.
Social network measures. There was no difference in popularity (in-degree) among those with ADHD than others, although those with inattentive ADHD reported fewer friends (out-degree) on average than others. Those with inattentive ADHD also had lower centrality and reach within their social networks.
Extracurricular involvement. Youth with ADHD had no significant difference in the total number of extracurricular activities with which they were involved than others, but were significantly less likely to be involved in an academically focused extracurricular activity.

Table 2: comparison of those meeting ADHD criteria with those not meeting, by subtype, for selected social network measures

Conclusions
This study found fewer social deficits in adolescents than suggested in the literature, possibly because most studies of childhood social networks were carried out in clinical samples, where ADHD severity is likely higher. These findings may also reflect that no previous study examined whole social networks of high school students, so that analyses of adolescent social ties were based on self-report, teacher report and parent report. Discrepancies between teacher, parent, and adolescent reports were considered to indicate that the adolescent with ADHD had an inaccurate representation of their own popularity. However, when the student nominated by an adolescent with ADHD as a friend reciprocates that nomination, then this is the most accurate way to measure the existence of a social tie. Perceived lack of social acceptance was striking among ADHD subgroups. This may reflect that while those with ADHD had friends, those friends may not have been in prestigious cliques; social acceptance can mean prestige to an adolescent rather than number of people that name the youth as a friend (Borgatti, Everett, & Johnson, 2013). A more detailed analysis of who adolescents with ADHD are friends with, rather than simply that they have friends, would be valuable.
In clinical practice, the results of this study allow clinicians to offer reassurance to children and parents of children with ADHD that most of the participants who had significant childhood ADHD symptoms appeared to be functioning well socially in adolescence, despite most differences in their perception about their level of social acceptance. The lack of significant differences on most measures, including presence and strength of social ties suggests that there is room for a positive, strengths based approach to the social problems of adolescents with ADHD.
This study does not predict outcomes. Further research is needed to identify to what extent friendship networks and characteristics predict future health behaviors and academic and career success. Further research is needed to explore the effects of comorbidities such as depression and Oppositional Defiant Disorder on the social networks of those with ADHD, as well as specific environmental factors that might be associated with better social outcomes, such as the size of the school and participation in specific types of extracurricular activities. Lastly, there is a noticeable gap in research addressing effective interventions for helping the minority of adolescents with ADHD who have more significant social difficulties affecting their quality of life.
A major strength of this study is that it is the largest population based examination of the social position of adolescents with ADHD in school social networks to date, and the only one describing specific social network characteristics. Limitations of the study include the age of the data, the lack of longitudinal whole network data, and the self-reported nature of the ADHD symptoms.