Is ADHD a Serious Condition?

The short answer is “yes”.  The US Center for Disease Control’s (CDC) review of ADHD starts with the statement: “Attention-deficit/hyperactivity disorder (ADHD) is a serious public health problem affecting a large number of children and adults” (http://www.cdc.gov/ncbddd/adhd/research.html).  My colleagues and I recently reviewed the ADHD literature.  That let us to describe ADHD as “…a seriously impairing, often persistent neurobiological disorder of high prevalence…” (Faraone et al., 2015).  Figure 1, which comes from that paper provides an overview of the lifetime trajectory of ADHD associated morbidity. 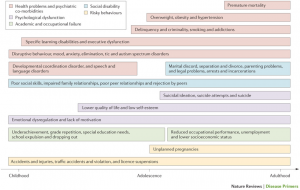 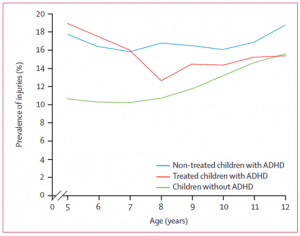 Especially compelling data about ADHD and injuries comes from a recent paper, in Lancet Psychiatry, which used the Danish national registers to follow a cohort of 710,120 children (Dalsgaard et al., 2015a).   Compared with children not having ADHD, those with ADHD were 30% more likely to sustain injuries than other children.  Pharmacotherapy for ADHD reduced the risk for injuries by 32% from 5 to 10 years of age.  Pharmacotherapy for ADHD reduced emergency room visits by 28.2% at age 10 and 45.7% at age 12.

Injuries are a substantial cause of ADHD-associated premature death.  This assertion comes from the work of Dalsgaard et al. (2015b) based on the same Danish registry discussed above.   In this second study, ADHD was associated with an increased risk for premature death and 53% of those deaths were due to injuries.  They reported the risk for premature death in three age groups: 1-5, 6-17 and >17.  For all three age groups, they found a greater risk for death in the ADHD group.  For ages 6 to 17 and greater than 17.  The ADHD associated risk for mortality in remained significant after excluding individuals with antisocial or substance use disorders.

Two other ADHD-associated morbidities, obesity and cigarette smoking, have clear medical consequences.  In a meta-analysis of 42 cross-sectional studies comprising 48,161 people with ADHD and 679,975 controls, my colleagues and I reported that the pooled prevalence of obesity was increased by about 40% in ADHD children compared with non-ADHD children and by about 70% in ADHD adults compared with non-ADHD adults (Cortese et al., 2015). The association between ADHD and obesity was significant for ADHD medication-naïve subjects but not for those medicated for ADHD (, which suggests that medication reduces the risk for obesity.

Likewise, a meta-analysis of 27 longitudinal studies assessed the risk for several addictive disorders with sample sizes ranging from 4142 to 4175 for ADHD and 6835 to 6880 non-ADHD controls (Lee et al., 2011).   Children with ADHD were at higher risk for disorders of abuse or dependence for nicotine, alcohol, marijuana, cocaine, and other unspecified substances.  Another meta-analysis (42 studies totaling 2360 participants) showed that medications for ADHD reduced the ADHD-associated risk for smoking (Schoenfelder et al., 2014).   The authors concluded that, for ADHD patients, “Consistent stimulant treatment for ADHD may reduce the risk of smoking”.  This finding is especially notable given that, for ADHD youth, cigarette smoking is a gateway drug to more serious addictions (Biederman et al., 2006).

Yes, ADHD is a serious disorder.  Although most ADHD people will be spared the worst of these outcomes, they must be considered by parents and patients when weighing the pros and cons of treatment options.