A Brief History of ADHD

A Brief History of ADHD

I have too often seen on the Internet or media the statement that ADHD is a recent invention of psychiatrists and/or pharmaceutical companies. Such statements ignore the long history of ADHD that my colleague and I reviewed in our “Primer” about ADHD, http://rdcu.be/gYyV. As you can see from The Figure, ADHD has a long history. The first ADHD syndrome was described in a German medical textbook by Weikard in 1775. That’s not a typo. The ADHD syndrome had been identified before the birth of the USA. Dr. Weikard did not use the term ADD or ADHD, yet he described a syndrome of hyperactivity and inattention that corresponds to what we call ADHD today. As you can see from the Figure, ADHD-like syndromes were described in Scotland in 1798 and in France in the late 19th century. The first description of an ADHD-like syndrome in a medical journal was by Dr. George Still in 1901 who described what he called a ‘defect of moral control” in The Lancet. The discovery that stimulant drugs are effective in treating ADHD occurred in 1937 when Dr. Charles Bradley discovered that Benzedrine (an amphetamine compound) improved the behavior of children diagnosed with behavioral disorders. In subsequent years, several terms were used to describe children with ADHD symptoms. Examples are Kramer-Pollnow syndrome, minimal brain damage, minimal brain dysfunction and hyperkinetic reaction. It was not until the 1980s that the term Attention Deficit Disorder (ADD) came into widespread use with the publication of the American Psychiatric Association’s Diagnostic and Statistical Manual (DSM). During the ensuing decades, several changes were made to the diagnostic criteria and the term ADD was replaced with ADHD so as not to overemphasize either inattention of hyperactivity when diagnosing the disorder. And, as the graphic below describes, these new and better diagnostic criteria led to many breakthroughs in our understanding of the nature of the disorder and the efficacy of treatments. So, if you think that ADHD is an invention of contemporary society, think again. It has been with us for quite some time. 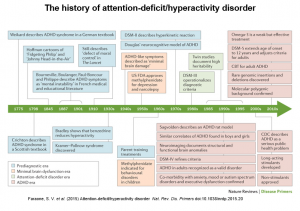