ADHD and Brain Imaging – Improvements for Diagnosis and Care

ADHD and Brain Imaging - Improvements for Diagnosis and Care 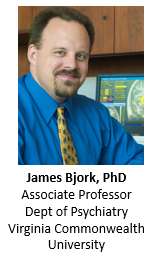 I have collected neuro-imaging data over the years on how the brain processes opportunities to respond to rewards as well as notification of having received awards, and also the brain activation and response to the threat of penalties such as going for too much reward, when you should stop earlier. I am interested in how these brain signatures can relate to a couple of things.

First of all they may address different theories about what makes the addictive brain different. For example a theory holds that there is a reward deficiency in people who are addictive because of genetic characteristics, and/or from chronic use of substances use such as alcohol. The addictive person’s brain is relatively unresponsive to non-drug rewards. Another theory is more of an impulsivity theory that distinguishes people who get into drugs, and especially who lose control over substance use once they start, as impulsive. They're characterized either by an exaggerated pursuit of rewards generally or some combination of that with an insufficient frontal cortex control over behavior. My work has been in adolescents and adult participants.

I would say on the whole my data are consistent with more of an impulsivity hypothesis but I would certainly welcome other clinicians and researchers to draw their own conclusions.

This work is very relevant to ADHD. We are trying to move away from diagnostic nosologies (classifications of diseases) and more toward a focus on circuit-level abnormalities; more focus on phenotypic abnormalities. There is a long pedigree of various papers in the literature, talking about the comorbidity between ADHD and oppositional defiant disorder, or between conduct disorder and so forth.  That approach may become a bit outmoded as this circuit level approach becomes more in vogue.

One thing that is under-appreciated is that the brain is connected to itself across regions. The population of those with ADHD is distinguished by a separate connectivity pattern. If a patient presents with a more emotional-reactive or hot profile, whether you call it ADHD, emotional defiance, OCD, or whatever, he or she is at particular risk for substance abuse.  Given the already published literature, I would contend having emotional aberrations alone is a risk factor for addiction.

Our ability now to measure brain patterns and connectivity will provide improved tools for diagnosing and treating disorders, emotional disturbances, risks for addiction, as well as developing reward structures that work, compared with the more classic labeling that we have relied on until now.