When my colleagues and I wrote our “Primer” about ADHD, http://rdcu.be/gYyV, the topic of brain mechanisms was a top priority. Because so much has been written about the ADHD brain, it is difficult to summarize. Yet we did it with the eight pictures reproduce here in one Figure. A quick overview of this Figure shows you the complexity of ADHD’s pathophysiology. There is no single brain region or neural circuit that is affected. Figures (a) and (b) show you the main regions implicated by structural and functional neuroimaging studies. As (c) shows, these regions are united by neural networks rich in noradrenalin (aka, norepinephrine) and dopamine, two neurotransmitters whose activity is regulated by medications that treat ADHD. Figure (d) describes two functional networks. The Executive Control network is, perhaps, the best described network in ADHD. This network regulates behavior by linking dorsal striatum with the dorsolateral prefrontal cortex. This network is essential for inhibitory control, self-regulation, working memory and attention. The Corticocerebellar network is a well-known regulator of complex motor skills. Data also suggest it play a role in the regulation of cognitive functions. Figure (d) describes the Reward Networks of the brain that link ventral striatum with prefrontal cortex. This network regulates how we experience and value rewards and punishments. In addition to its involvement in ADHD, this network has also been implicated in substance use disorders, for which ADHD persons are at high risk. Figures (f) (g) and (h) complete the puzzle with additional regions implicated in ADHD whose role is less well understood. One role for these regions is in the regulation of the Default Mode Network, which controls what the brain does when it is not focused on any specific task (e.g., daydreaming, mind wandering). People differ in the degree to which they shift between the default mode network and networks like Reward or Executive Control, which are active when we engage the world. Recent data suggest that the brains of ADHD people may be in ‘default mode’ when they ought to be engaged in the world. 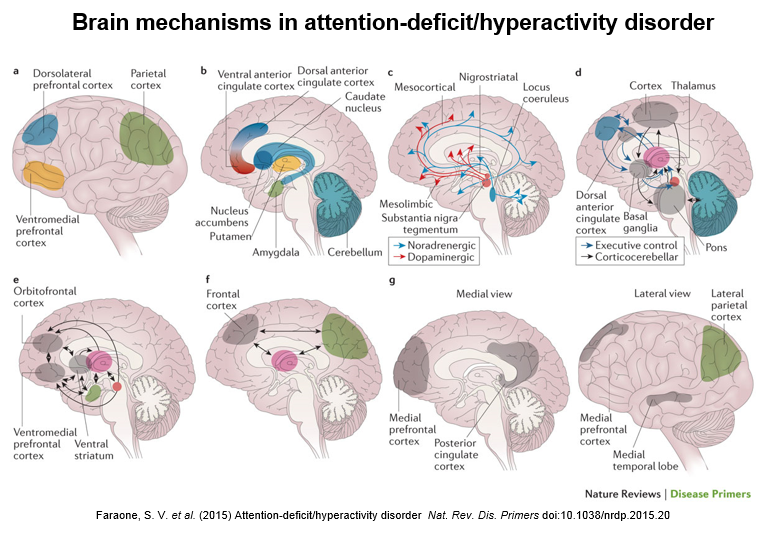