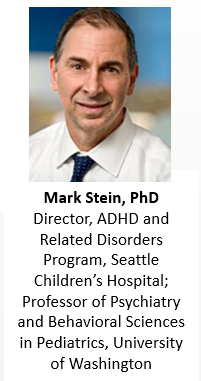 Several years ago, we began a study of mothers with ADHD who have young children at risk for ADHD due to genetics and environment, with ADHD symptoms, who have not yet started treatment. This study, "Mothers First", is testing whether treating mothers with ADHD first, with either stimulant medication or parent training, not only helps mothers, but also improves parenting and reduced or delays the need for medication in the child (Chronis-Tuscano, Wang, Strickland, Almirall, & Stein, in press). We are in the last year of the study at Seattle Children’s hospital, which is aimed at mothers with suspected ADHD who have 3-7 year olds with ADHD symptoms who are not taking ADHD medications. As part of the study, mothers and children are evaluated for ADHD and receive study treatments and monitoring. In addition, we are now beginning an extension study with fathers with ADHD, "Father too". In this study, fathers will be treated with 8 weeks of stimulant medication or behavioral parent training. In this our first study with fathers, we look forward to comparing our experience with mothers to ADHD treatment and measuring the impact on parenting and on young children with ADHD.