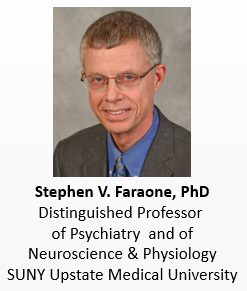 This is the DNA that puts people at risk for having ADHD. Right now we have about 17,000 ADHD people in this big experiment, along with 95,000 controls. It's really the largest experiment study in ADHD ever to have been done. What's really exciting about this in 2016 is that, finally, after many years of doing these genome-wide studies, we can finally say for certain that we have detected loci on these genomes that are what we call genome-wide significant, meaning that we're very sure that they are pointing to genes that are associated with ADHD. We think we have between five and eight genes that we can be sure about. We're actually finalizing an analysis. I presented the final results at the January 2016 annual meeting of APSARD, the American Professional Society of ADHD and Related Disorders.

So far, the genes that we've discovered are quite interesting, because they're pointing to novel pathways that haven't been considered before. For example, everybody knows about the Dopamine system in ADHD and the Norepinephrine system in ADHD. These are well-known biological pathways that have been located by the treatments for the disorder. We're now locating biological paths which, for example, are involved in synaptic plasticity in the development of the brain. These are genes that are involved both very early on in the brain during development, from the fetal stage up through young adulthood. They are also involved in learning and memory in the remodeling of synapses.